Friday, May 1, 2020
Working from home has been a productive transition for our Olympic Strength and Conditioning Staff. We have participated in countless zoom meetings within our staff, sport psychology, sport assignments, and other universities around the nation! We recently chatted with Florida State regarding force plates and other Big Ten Universities about various performance topics.

Lastly, we wanted to congratulate our 2019-2020 Iowa Athletes of the Year, Luka Garza with Men’s Basketball & Katie Birch with Field Hockey.

Monday, April 6, 2020
The month of March was filled with some amazing student-athlete moments!

What a time to be an Iowa Hawkeye.

Our staff wants to announce a congratulations to the following;

Spencer Lee - Wrestling: recipient of the Dan Hodge Award and Big Ten Wrestler of the Year

Laulauga Tausaga - Track & Field: named Midwest Regional Female Field Athlete of the Year and Track and Field Athletes of the 2020 Big Ten Indoor Championships, winning gold in the weight throw and runner-up in the shot put

The Men’s Tennis team who finished their season with their highest ranking in program history (#20) consisting of Kareem Allaf, ranked #51 in singles and doubles team Will Davies and Oliver Okonkwo at #12

Isabella Solaroli and Megan Conroy - Field Hockey: named NFHCA Scholars of Distinction along with 9 other of their teammates named to National Academic Squad

We have so much appreciation for the student-athlete and coaches we serve. Thank you for your hard work.

Monday, March 2, 2020
The Olympic strength and Conditioning staff was excited to make more additions in the Isoinertial training department by installing upright pulley flywheel systems. The staff was also involved in the monthly Sport Performance forum, led by Terry Noonan, Director of the Sport Performance Department titled, NCAA: Enhancing a Culture of Safety in College Athletics. Our very own, Coach Renteria spoke at a University of Iowa Sports Medicine clinic for college and high school soccer coaches regarding injury mitigation and load management for soccer players. Additionally, Coach Renteria led a curriculum for the interns regarding programming within the weight room. Our interns began their exercise progressions on both squat and deadlift.

Wednesday, January 29, 2020
The spring semester has begun and the training is back in action! Coach Maxwell and Coach Dinkelman finished out winter break hosting the West Branch Middle School Kinesiology class’ visit to the Olympic weight room.

Additionally, we are excited to have our volunteer coaches for the spring semester; Hunter Barnard, Nathan Ludwig, Cole Moore, Kris Tiedt, Josh Wilken, and the returning Ryan Renken and Thomas Lang. Our interns have started the internship with an exercise progression curriculum led by Coach Walrod. They will be presenting their exercise progressions to the full time staff in the upcoming weeks. 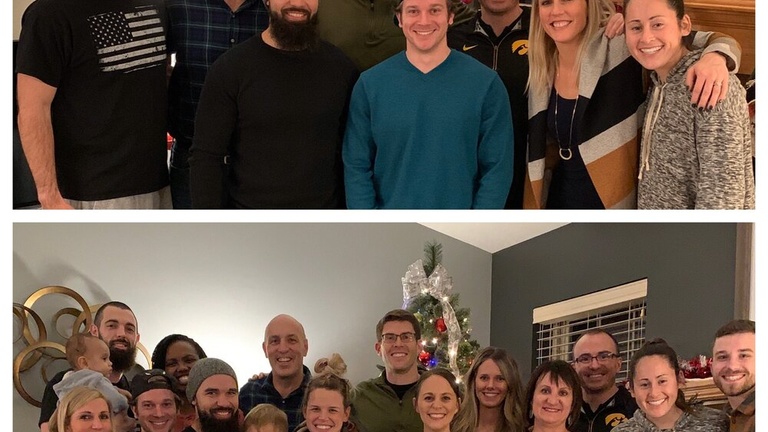 Wednesday, January 1, 2020
Fall 2019 was a semester full of growth, quality training, and great competition. The staff enjoyed the first ever Sport Performance Forum led by a sport coach, Robin Lund. The Assistant Baseball (Pitching) Coach’s presentation was titled, “Using Sport Science as the Foundation for Sport Coaches”. We are excited to see what 2020 brings!

Happy Holiday and Happy New Year from our family to yours!

Sunday, December 1, 2019
The Strength & Conditioning staff had a busy month filled with competition, training, and education. The interns had a curriculum session about Simple-Systems Science. Additionally, a Sport Performance Forum was held. Coach Roberts led the discussion by presenting on Flywheel Training (What it is and where it fits). It was a great opportunity for all sport performance staff members to hear about our new tool in Strength & Conditioning. We have committed to implementing flywheel training at a team level.

Good luck to our winter sports!

Good luck to the Iowa Hawkeyes who are heading into tournament time of their fall seasons!

Monday, September 30, 2019
September flew by with the resumption of training, intern progressions, and our fall sports taking off into their season. Good luck to Volleyball, Women’s Soccer, Cross Country, and Field Hockey during their Big Ten competition! Coach Dinkelman is participating in the Executive Leadership Academy within University Iowa Human Resources. The intensive nine-month academy develops and enhances participant core competencies essential for effective, agile, and innovative leadership. Coach Walrod has become an Instructor for the Biomechanics of Sport & Physical Activity course in the undergraduate Health & Human Physiology Program. Coach Roberts continues his education within the Health & Human Physiology undergraduate program taking on a different course for the fall, Metabolic Exercise Testing/Prescription.

Saturday, August 31, 2019
The Strength & Conditioning staff kicks off the Fall semester with a productive week of training and development. We are excited to welcome back our student-athletes to another great year of improvement! Coach Walrod and Coach Roberts finished the summer attending the Exxentric High Performance Clinic in Illinois. Coach Evans presented at the clinic as well, his presentation was titled, Using Data to Promote Collaboration & Improved Outcomes.